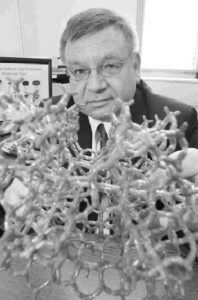 PhD in Physical Chemistry in the University of Utah (1980).

20+ year career in industry with Air Products and Chemicals (1980-1985) and Engelhard Corporation (1985-2003) both, Fortune 500 $ multibillion US chemical companies, serving as Research Fellow and Manager of New Ventures at Engelhard, leading the company’s Blue Sky research group.

In his industrial career, Dr. Kuznicki was named 1996 New Jersey Inventor of the Year and received the 2002 Thomas Edison Award for the most important patent contribution by a scientist in industry in New Jersey.

In 2004, Dr. Kuznicki began an academic career at the University of Alberta, being named theinitial Alberta Ingenuity Fund Scholar.

In 2011, Dr. Kuznicki was named Inaugural Distinguished Chemistry Alumnus at the University of Utah and appointed Adjunct Professor.

In 2016, Kuznicki was named a Fellow of the National Academy of Inventors.